The date is December 1, 1981. This is the day Tina officially became an awesome mom! Well, I guess it was nine months before that but we won’t get into technicalities. This was the morning of all mornings. How did it work back in those days when you needed to get to Tortola to deliver a baby? Well, in her instance it was hop on a flight from Virgin Gorda to Beef Island (those existed back then), and then take a taxi to Peebles Hospital in Road Town. Judging by the roads now, one can only imagine that labor was sped up a bit along the way thanks to speed bumps and pot holes. She was a trooper back then, much like she is now, and shortly after arriving at hospital delivered a bouncing baby girl. Tina and Ludwig would name her Christine after Tina’s grandmother.

Fast forward four more years and Tina and Ludwig decided that it was time to brush up on their baby skills. We think Tina just wanted an excuse to binge watch every VHS tape in the house at 3 in the morning though. Some of you will remember the early video machines where the remote was actually plugged in…. yep, one of those.  Perhaps this is where Michelle gets her addiction to TV. Now with two blonde haired, bubbly little girls their family was complete. Really, how can you beat perfection right?!

Tina taught her girls many things over the years. From the basics like brushing teeth and hair (Michelle still doesn’t much like the hair part now) to how to fish, how to play a wide variety of card games… and how to earn your win because it was never given to you! She taught them how to ride the ground seas and get the sand out of your hair afterwards (well, most of it, anyway), but most importantly she taught them to be strong, independent and determined. Some might take their determination as a stubborn Goschler streak but it really is that Roy determination, we promise. 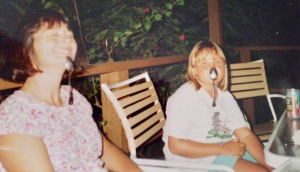 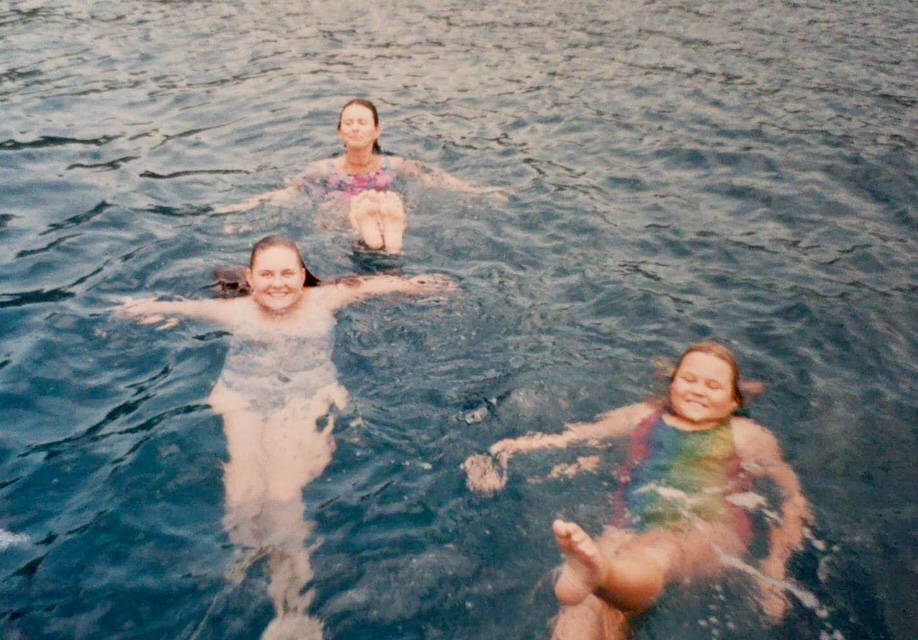 Tina and Ludwig made the difficult decision to send the girls to boarding school when they finished grade 6 at the tender age of eleven. School choices on Virgin Gorda were quite limited so they knew they had to push their babies out of the nest in order for their wings to grow.  Though they didn’t admit it at the time, the truth came out later that after each girl’s first day at school, they needed to pull the car over just outside the school entrance so they could cry.

Being away from home taught the girls to be independent, and make their own decisions, even if it meant messing up now and again. The most comforting thing of all was knowing that a familiar voice was just a quick collect call away. Yes, those great “You’ve received a collect call from ‘Its Christine, call me back’. Do you wish to accept the charges?” calls.  While both girls grew to love their new home, the first couple of years were the most difficult, with many tears due to homesickness (especially in winter!) and the frustration of learning new and challenging subjects like French, calculus and Canadian history. Read up on it… I dare you.  Even Tina was put to sleep by the textbook! The girls rose to the challenge, though, and each was listed on the honor roll every year. You should have seen Ludwig puffing out his chest in pride when those reports came home!

Both girls took the opportunity, after years away, to move back to their one true home. Really, how could they resist. Tina does make a mean soft boiled egg, or dip egg as they call it, so that’s got to be why. This was even Christine’s “last meal” as a Goschler on her wedding day and the last meal Michelle and Tina would have in their family home before Irma blew it apart.

Okay, all joking aside. Really they just needed the comfort of their mother even though they were already grown up. Tina is always there for her girls. Whether they just need a listening ear, stern advice, a belly fully of spaghetti, or a thrashing at backgammon. She’s up for it all.

She also has embraced her role as granny… to both her two legged and four legged grand babies. Both Moki and Connor love spending time with her. Lots of food, cuddles and walks. Amazing how much you can compare a newborn’s needs to a dog’s. Hmmm.

No one could ask for a better mom or granny than Tina. She is strong, thoughtful, resilient, adventurous, funny… the list could go on. But, most of all she is loving and has the biggest heart any daughters could ask for.