Tina is now about half way through her holidays, and we are pleased to report that she appears to be having a good time, and that Guavaberry hasn’t gone the way of the Titanic in her absence. In fact, we stuck an extra outboard motor on to get more horsepower! We are getting the small pesky tasks done around here that have been nagging at us for a while.

Since Irma decided she did not like our entrance fencing,  we have decided to take the opportunity to update our first impression and fill in the cattle guards. Many newbies have asked in the past what those grates were at the entrance and why they were there. Of course, the die-hard Guavaberry guests know exactly why. Years ago there were cows roaming the streets. Of course, they were quite the attraction for the tourists, making photo ops (and “cow pies”) aplenty. BUT, property owners did not like hosting an all you can eat buffet for them. So in line with that, everyone had cattle guards at their entrances to keep them out. Now that the cows have gone it makes no sense to have these anymore. (The goats are smart enough to walk around them anyway.) No cattle guard means no need for railings, and leads to a cleaner, more modern look. Mahogany Rentals will be very grateful for that change too. They have had a number of their vehicles returned with streaks of brown paint on them. Not pointing fingers or anything, but there may have been one or two of Edith’s epic Pina Coladas consumed at Mad Dogs prior to these incidents.

Irma also removed our gates for us. Because really, why have a gate without a fence!? After a few months of having a double entrance to our office, we have become quite fond of it so we are leaving it as is! No more 14 point turn to get up to the Top of the Baths for that amazing sunset cocktail. There won’t be a designated “in” and “out” so you can go whichever way you please. Just remember to look LEFT first when you come to the main road.

The satellite has been installed as well as the devices that will allow us to have signal in each of our cottages. Please don’t ask us how it all works. We are just happy to have finally gotten this one done. We’ve been doing research for years but never came across anything that would allow us to get a signal across 20 acres without digging up our roads. Finally technology has come far enough that this will (hopefully) work. We have a few more weeks to iron out any kinks in the system before the first wave of the “busy season” starts at Thanksgiving.

Ian and Michelle have been left in charge of pushing the construction crews. So far it has been going smoothly. The patio ceiling panels are going in at Hibiscus and Mango. Walls are going up in Jasmine AND Flamboyant (finally). Insulation is going in at Alamanda. Cashew’s deck is moving along nicely as well. There was nearly a miscommunication on that one, but thankfully that got sorted out. 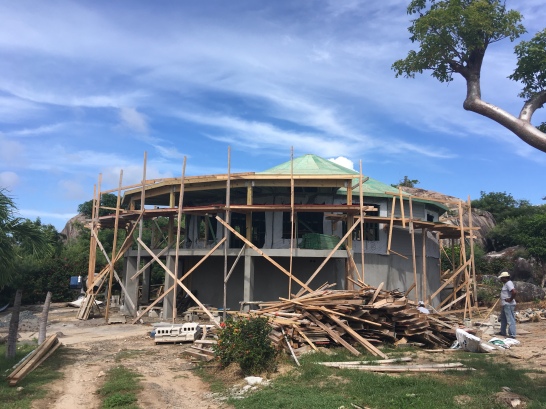 They did have to call the big bosses mid hike “en Provence” to get their permission to move around some walls in Flamboyant. The bosses said “we trust that you make good choices so do what needs to be done”. How many glasses of rose were consumed prior to that sentence we will never know. What does everyone think of a disco ball for the master bedroom? Since the permission was granted, Ian and Michelle went ahead and decided how to place the stairs at Flamboyant and Alamanda, as well as how to tile the bathroom at Cashew. Hopefully Tina likes the decisions because they will literally be set in concrete and grout by the time she returns… Wish us luck! 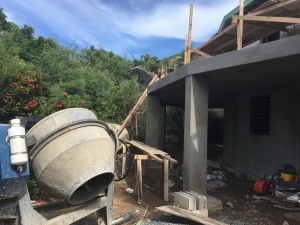