The Atlantic hurricane season really started to pick up this month. Dorian popped up in August and gave us the wake up call, so we at least were prepared this time around. Prepared for what? We don’t actually know. It’s like a game of dodge ball this season with these storms. The weather men can’t seem to figure it out either. 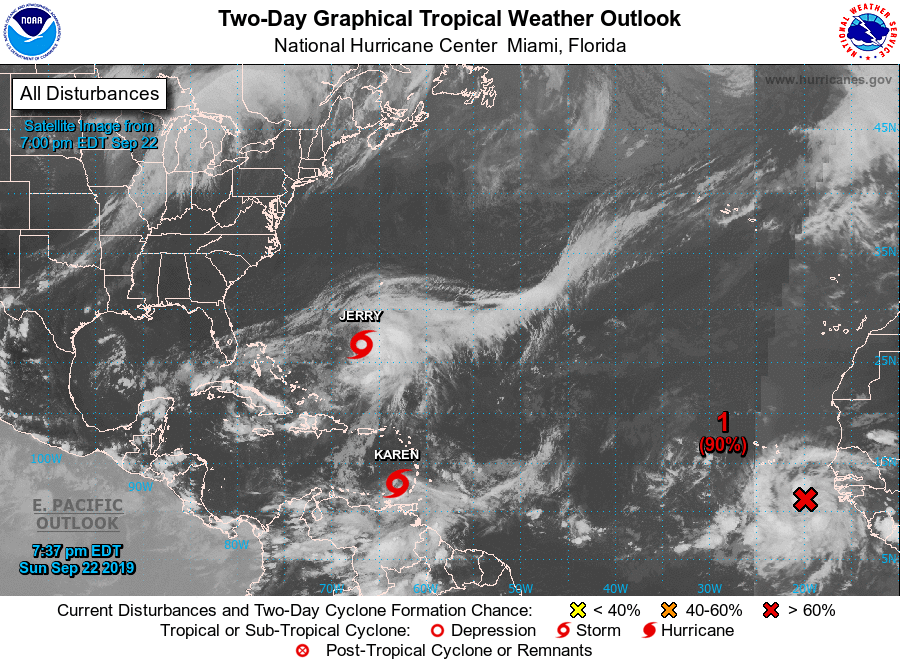 After Dorian, Jerry was headed our way. We did everything to prepare. Warned the guests about what they could expect, moved the patio furnishings inside of all the houses, and shipped Tina off to Florida for her birthday! Then all we had to do was sit and wait. Duck… duck…. duck? Hello? Jerry? Where’d you go? A few puffs of breeze and that was really all. Hmm… okay. We’ll take it.

Fast forward a few days… the weather men have us all a little on edge when they keep telling us about weather “blobs” that haven’t even come off Africa yet. But hold on… what’s THAT all the way south by Trinidad? A Tropical Depression? So far south? Okay… interesting. It will just cut west like all storms to… WRONG! It’s headed North?! Whoa, didn’t see that coming. And just like that, out of the blue, Tropical Storm Karen is born, and packing a lot of rain. She just can’t decide really where she’s going, when she’ll be coming, and what she wants be when she “grows up”. Duck… Duck… Duck… GOOSE! Here we go again. 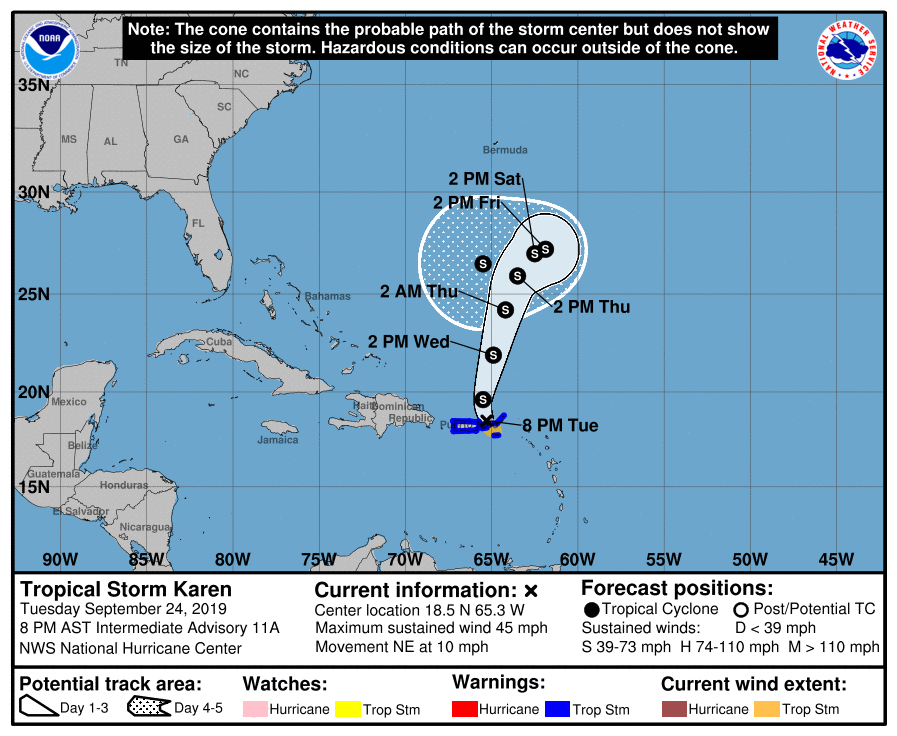 Luckily after our dry run with Jerry last week there wasn’t too much prep to do. This time the weather people got to do all the work. Update after update we waited, and waited. She shifted a little to the west, back a bit to the east, down to a tropical depression, back up to a tropical storm, slowed down, slowed down some more. The staff went home early in anticipation of the weather arriving around 2:00 pm on Tuesday. But like a typical woman she made everyone wait a little longer still. Finally around 8:00 the rain started, and it got a little blustery. Not sure what winds we actually got, but thankfully it wasn’t much.  Part of a tree branch down on the guinip tree at the beach and that’s all the damage we’ve seen.

The weather has delayed the unpacking of the Deltec trailers that arrived last week. Like a kid on Christmas morning we are anxiously waiting. Inside the four trailers are Plum Tree and Lime Tree houses. Despite the fact that they are here on time, they will not be ready for Christmas as we might have hoped for. There was an unforeseen delay in Hawaii with our Breezeway windows order and those won’t be arriving until MAYBE mid December. No windows means we can’t finish the interiors. Princess Quarters will get the Deltecs as far as they can, and then wait. Talk about an anticlimactic end to our rebuild saga. 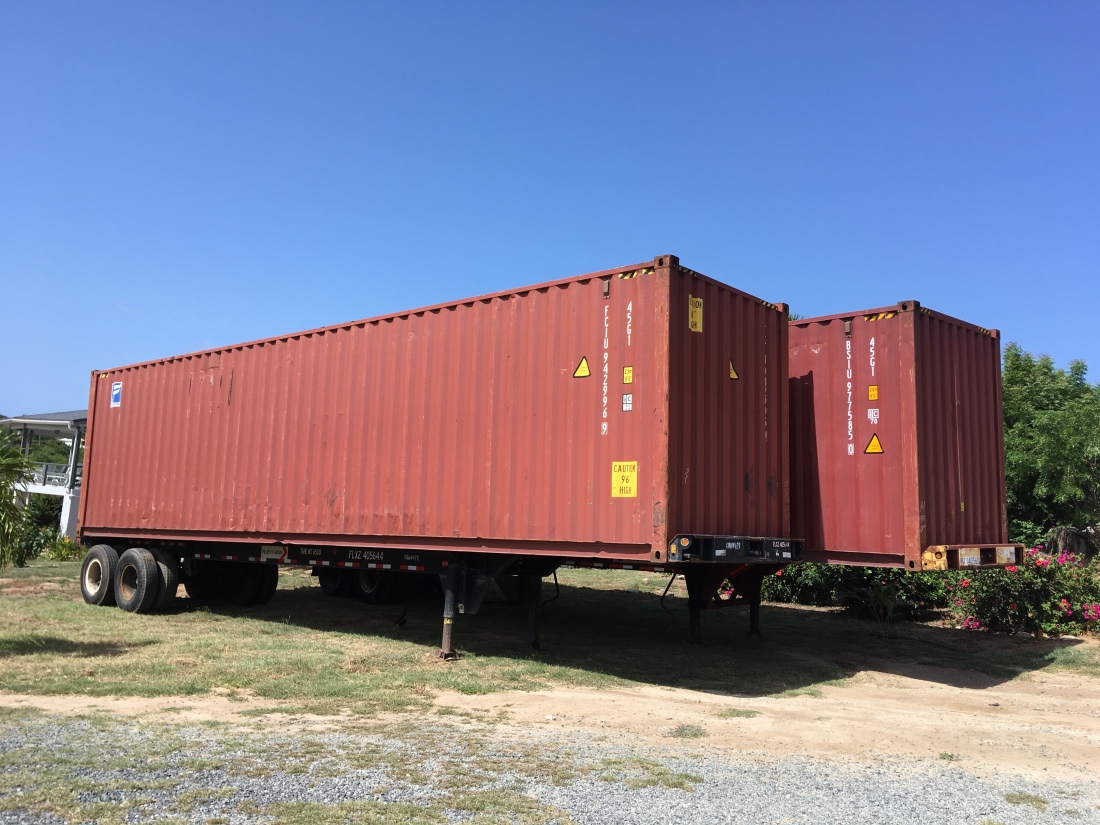 We did have some other excitement on property last week. Tina’s house was ready for its concrete pour! Her contractor, Sam, had come up the week prior and asked us to take a walk down to the house. Walk? In this heat? If you insist. We stop part of the way down to the beach, right there just before the dip in the road. Instantly we know what he’s about to ask… and before he can even get the words out… No, Sam … you can NOT move that rock to get the concrete pump truck down this road.  Not that we were trying to be difficult … but that rock on the right side of the road just before the dip is not a surface rock, hence why the road has all the funny curves in it as it is.

Okay, so can’t move the rock. Plan B… can he cut the trees? If you must… BUT there is a natural gut that flows through right by the dip so anything you cut must be promptly removed so it doesn’t stop the flow of any water in heavy rainfall (fast forward to TS Karen a week later!).  The truck needs a 7 ft wide clearance… the road is 8 ft wide. Perfect! We think it will actually fit, but lets get the driver to take a walk and make sure. 30 minutes later, the driver confirms… the truck will fit! We’ve never seen Sam so happy in all the years he’s been working on our projects. He actually helped built Tina’s original house in 1989. His face was beaming and he was grinning ear to ear. He thought he would have to have his guys pour her house by hand which would have taken days.

The following week, the scene was set. The pump truck was scheduled to come at 8:30… but of course in true Virgin Gorda fashion it was more like 9:30. Lo and behold… they made it down! And only took out part of a cactus on their way. Very impressive. Tina wasn’t here to witness it, but she was enjoying some time away finally. Connor made sure to keep a close eye on the maneuvers… from safely across the fence. Three point turning a concrete truck can’t be easy! 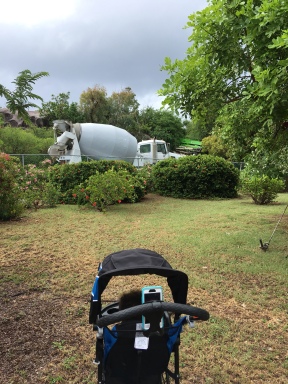 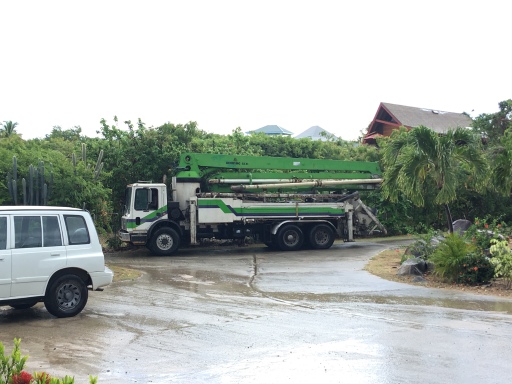 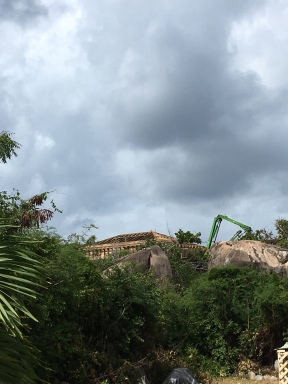 Hopefully now that everyone got not one, but TWO storm “rest” days… work will keep on cranking out as we gear up for season just around the corner.